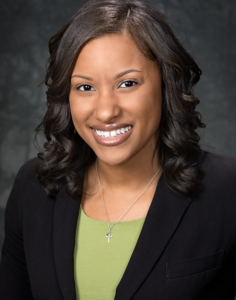 Jasmine Fields was born and raised in Kansas City, Missouri.  From a very young age Jasmine has been known for her service to others.  She graduated  at the top of her class from Platte County R-III High School where she displayed her Pirate Pride as a leader in several organizations.  She was the first Black drum major of the Pirate Pride Marching Band. During high school, she came to know Christ as her personal Lord and Savior while visiting Canaan Worship Center.  From that point on she has been a dedicated and active member of God’s Kingdom.  Through the years of her spiritual journey she has sang in the choir, served as an altar worker, new members assistant director and minister led to high school students.

During her time at Missouri Western State University, she became a member of the NAACP where she served in various positions from Chair, to President, and even held a Regional Position both in the college division and in an adult branch. She continued her service by becoming a member of Alpha Kappa Alpha Sorority Incorporated in December 2011. Her service in Alpha Kappa Alpha included mentoring over 50 young women through coordinating the Little Miss AKA Pageant and Emerging Young Leaders.

While at Missouri Western State University, she met her future husband, United States Sailor Moses Fields.  They married in 2013 and gave birth to their first child, Lillian in 2018 and their second daughter Jasmine Rose in 2019.

Jasmine completed her law degree at the University of Missouri – Kansas City School of Law where she was the Chief Justice of the Board of Barristers in 2016. She was sworn in as a licensed Kansas Attorney in 2017.  She opened her own law firm in 2020.

Her personal mission is to empower people to live their best lives through education, accountability, and coaching.